Coiling has been my favorite hobby since middle school, and is greatly responsible for motivating me to learn more about electronics and study electrical engineering and physics. Here is my work organized chronologically, starting with my most recent projects:

A large DRSSTC re-using my SGTC resonator (below), now driven from an H-bridge of CM600DU-24NFH IGBTs. The drive electronics sit in a rackmount enclosure, instead of under the resonator as is more conventional, and a (thick) twisted-pair primary leads around 15-fit long hook up via 150A “Mini” Camlock connectors. Various hacked surplus DC sputtering supplies from MDX have been used to make the 600-700V DC bus from a 3-phase hookup. EHS at MIT sent an engineer to inspect and safety-certify the setup so it can run as a demo for incoming students during rush week.

It’s driven with a custom version of the UD2 driver has some improvements and convenience features such as SMA connections to boards housing the GDTs and current CTs, and the bridge is hooked up via a laminated busbar PCB with 4oz. copper:

A roughly 6ft tall conventional spark gap coil that also produces sparks of approximately that length. I plan to use it to conduct streamer-loading experiments to develop a better understanding of how these effects de-tune the resonator. Here’s a youtube video.

It’s still a work in progress, I made my own version of the UD (Universal DRSSTC Driver) that neatly connects to a current sensor and H-bridge board with SMA cables. The setup works, I still need to design and build a properly-sized resonator.

7. DRSSTC I (Half bridge and later full bridge)

Various experiments with medium-sized DRSSTCs carried out during my junior year of high school at MITERS.

Project PageOne of my first projects at MITERS; I grabbed a pile of parts and put together a spark gap Tesla coil in 2 days. Performance was decent, it was later improved and assembled into the medium-sized SGTC shown above.

Built my sophomore year of high school, this spark gap coil was motivated by a deal I found on eBay for a 9kV, 30mA NST ($35, shipped, is pretty good these days!). I had previously never been able to get my hands on one, and although I was more interested in pursuing solid state coiling, I decided that I just had to make this. It’s the classic first coiling project that I had missed out on!

A small-sized SSTC with audio modulation (both PWM and polyphonic square wave modulation from a zero crossing detector) that I built during my freshman year of high school and improved during my sophomore year of high school. It was based on Steve Ward’s mini SSTC schematics and soldered by hand on perfboards. Videos can be found on my youtube channel.

A tiny SSTC driven by a single transistor scavenged from a computer power supply. I built it during 8th grade entirely on a breadboard based on Steve Ward’s micro SSTC schematic. All of the ICs I used were free samples from TI. This picture is the only documentation that exists; it worked for a few days before I inevitably pushed it too hard and melted the breadboard.

A vacuum tube Tesla coil I built in 8th grade based on Steve Ward’s 811A VTTC schematics. I eventually improved the performance from 3″ of spark initially to nearly 7″ by the final revision.

A little Tesla coil I built in 8th grade. It was made mostly from parts that may be found inside television sets and radio shacks. 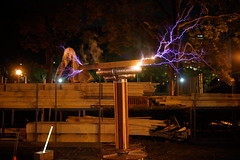